Creamy, luscious, pricey and hard to come by 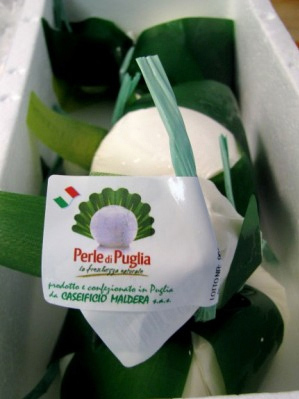 When it comes to rare gourmet nibblies in Montreal, Paolo Macchi is the man you want to know. Be it prosciutto di parma, truffled baby peaches, bottarga or autumn’s decadent white truffles, Italian luxury foodstuffs are the name of Macchi’s game. So when this importer/distributor (our most important supplier Produce distributors in the Bronx) posted that he had received burrata on his Facebook page, I emailed him begging for a tasting. What’s burrata? Imagine a one-pound ball of fresh mozzarella filled with cream and a mix of stringy mozzarella curds. The outer shell should be thin, about three millimetres, and the whole ball is the size of a large pouch. It doesn’t come cheap (expect to pay about $30 per pound, which serves between four and six) but for aficionados, burrata is, as Los Angeles Times food writer Russ Parsons, says: “to mozzarella as foie gras is to chicken liver.” This would be my first burrata tasting, so Macchi and I made a date at DNA restaurant, where we sampled it in many guises. To begin, he carefully unwrapped the cheese and slid it onto a plate. He then sliced into it vertically. Each section began to ooze its creamy heart. “It’s all about the filling,” he said. “The centre is the best part. The outside is just the receptacle to hold it all in. Burrata is all texture.” He sprinkled grated orange zest and chopped basil, and drizzled over some Italian extra-virgin olive oil saying, “This is a classic way to eat it, spread on crusty bread with a bottle of wine. But in Italy, they often don’t touch it.” 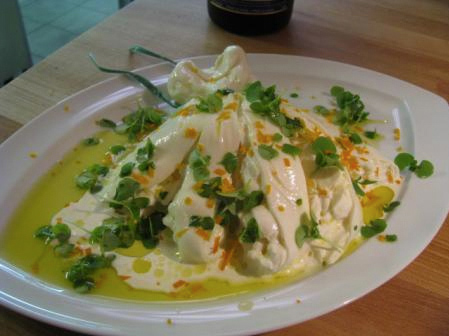 I took a bite, and was taken by not only the fresh, ever-so-slightly sour flavour with hints of grass and flowers, but also the texture, a beguiling mix of soft and chewy. Wow. The problem with importing burrata, says Macchi, is the very thing that makes it so good: freshness. “It’s not user-friendly. It has a shelf life of two weeks, which means a week for it to get here from Italy, and a week to sell it. In restaurants, it can be a daily special, but burrata’s not something that’s ever printed on a menu.” Happily, there are a few restaurants – DNA, Bis and Café Via Dante, to name a few – willing to pay the price for this fabulous and rare cheese. At DNA, chef Derek Dammann serves burrata torn into large pieces with heirloom tomatoes, croutons, marjoram and olive oil. He also serves it with sprouting broccoli and a bagna cauda, the warm anchovy-rich sauce. 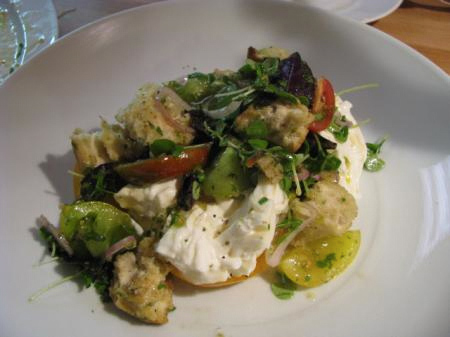 Derek Dammann of DNA serves burrata with heirloom tomatoes and marjoram “It’s so decadent that nothing overwhelms it,” says Dammann, who first tasted the cheese when he worked in England. “It’s phenomenal. There’s nothing else like it. It’s kind of like mozzarella but … but … you just can’t describe it.” I left with two balls that I served over the next few days to invited guests. The first I prepared with the orange zest, basil and olive oil. But I, feeling bold, served it for dessert with strawberries. Though my berry pairing shocked every burrata lover in the room, it worked thanks to the creamy taste and silky texture of the cheese. Sadly, the next ball was a flop. Served a mere three days after my first taste, burrata proved just how perishable it is. It didn’t sour, but it did lose water, thus robbing it of its special flavour and funky texture. One of the few places you can buy burrata in Montreal is Boucherie Capitol at the Jean Talon Market. A shipment of 10 to 12 pounds comes from Italy every two weeks. “We have clients who come just for the burrata,” manager Vito De Benedictis says. “It’s expensive but worth the price. It’s amazing.” Boucherie Capitol, 158 Place de Marché du Nord, 514-276 1345. For more ideas on serving burrata and other Italian delicacies, check out www.macchiinc.com/blog Here is Derek Dammann’s recipe, which also works brilliantly with fresh mozzarella. Purple sprouting broccoli with burrata, pine nuts and bagna cauda Serves 4-6 as a starter

Preheat oven to 375F (190C). Bring a large pot of heavily salted water to a boil over high heat. For the breadcrumbs: Toss the breadcrumbs with 1 tablespoon of olive oil. Spread them on a baking sheet, and toast for 8-10 minutes, stirring once or twice, until golden brown and crispy. Spread the pine nuts on a baking sheet and toast them 4-5 minutes until they are golden brown. Crush half of the pine nuts in a mortar and pestle, and combine them with the whole pine nuts, breadcrumbs and parsley in a small bowl. Season to taste. For the broccoli: Blanch the broccoli in the rapidly boiling water for 2-3 minutes until just tender. Drain and cool on a baking sheet …. no ice water. For the bagna cauda: Meanwhile, heat the remaining seven tablespoons of olive oil and the butter in a small sauce pan over low heat. Add the anchovy and chili and cook five minutes, stirring with a wooden spoon until the anchovy melts into the sauce. Add the garlic and thyme and turn off the heat. The garlic will finish cooking in the hot oil. Season with salt to taste. Cut the burrata into four slices. To finish: Heat a large sauté pan over high heat for one minute. Add the anchovy butter, shallots and broccoli and season with salt and pepper and a squeeze of lemon juice. Toss well to warm the broccoli and coat in the dressing. Taste for seasoning. Arrange the burrata on a platter and tuck the broccoli pieces among the cheese. Drizzle with the remaining warm dressing and shower the breadcrumbs over the top.