SAFFRON – DID YOU KNOW THIS?

After having spent a great weekend with my family, I am so excited that it’s finally Monday and I can share this week’s product with you! 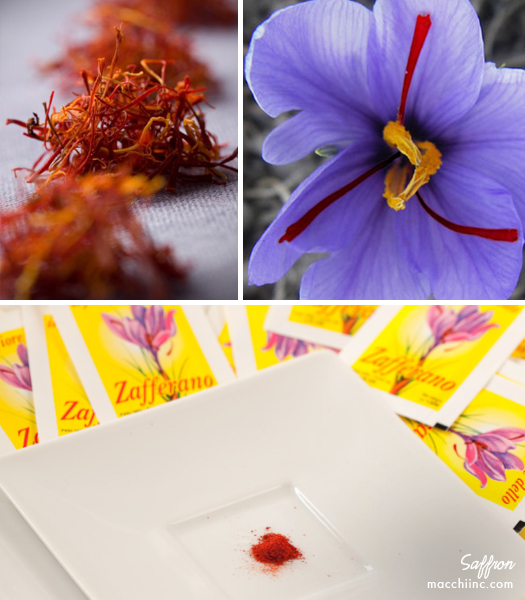 Say hello to the royalty of spices: SAFFRON or as many others say “The Gold” of spices.

Since Saffron is an ancient, respectable and world spread spice, I felt a lot of pressure in finding the “right” information and have therefore literarily spent a whole week making my research and done a lot of cross referencing before I reached MY conclusion of what I would like to share with you on this exquisite product.

Saffron has apparently been around since the 7th Century BC, in Mesopotamia (Iraq), but then it was mostly used as a colorant/dye and also for medicinal use. With time it was spread around Asia, the Mediterranean basin and Europe and started also being used for aesthetic and cosmetic use as in perfumes, mascaras and potpourris. It is also said that Cleopatra used saffron in her baths so that lovemaking would be more pleasurable!

What’s important to know though is that specific breed, the Saffron Crocus, was a “wilder” version of the one that we are using today and what I, to my surprise, found out is that this specific domesticated breed of the saffron Crocus, was first detected on the island of Crete!

On it’s own, saffron is not really very tasty (at least not for me) as I am tasting it right now I am first tasting bitter and after a distinct taste of Iron. As I continued my research I stumbled over the words; “honey” and “hay-like” as other descriptions of how saffron tastes like.

But that is not why we love to use this product in our food, it’s the heavenly aroma, how can something that tastes bitter, smell so sweet!

And last but not least let’s not forget the hypnotic colour of “golden-red”! By just adding a small amount of saffron in a dish, it makes it look as if there has just been a drop of gold added in it.

Where is Saffron grown today?

Spain’s varieties, are generally mellower in colour, flavour, and aroma; Italian varieties are slightly more potent than Spanish, while the most intense varieties tend to be Persian (Iran) in origin. India, but they have banned the export of high-grade saffron abroad. Aside from these, various “boutique” crops are available from New Zealand, France, Switzerland, England and the US. In the US, Pennsylvania Dutch saffron is known for its earthy notes and is marketed in small quantities.

Consumers regard certain “growers” as “premium” quality. The “Aquila” saffron (zafferano dell’ Aquila) has an unusually pungent aroma, and intense color and is grown exclusively on eight hectares in the Navelli Valley of Italy’s Abruzzo region, near L’Aquila.

But in Italy the biggest saffron cultivation, for quality and quantity, is in San Gavino Monreale, Sardinia. This is where “our” saffron that we sell comes from and is then shipped to and packaged in Milano.

There is off course so much more to say about this “royalty” that is over 2000 years-old, but as we all know the secret always “lies within” and this time it’s within the experience of Saffron…