All You Need To Know About Prosciutto 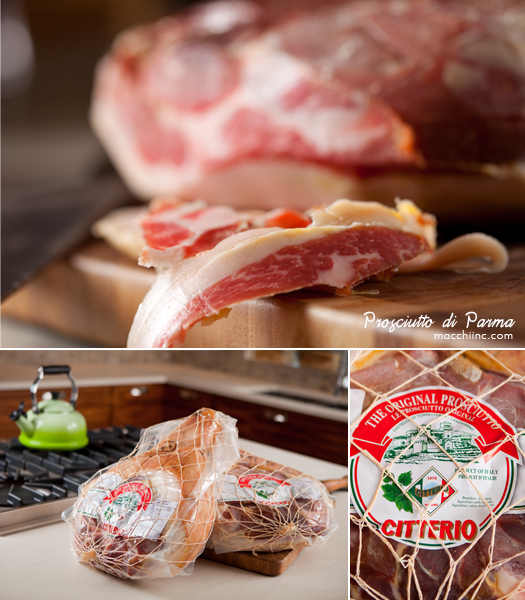 Prosciutto di parma has for centuries been made and can only be made and cured in the countryside of Parma, Italy.

Four ingredients are needed for the production of Prosciutto di Parma®:

Prosciutto di Parma® is an all-natural ham and all additives are prohibited.

The making of Parma Ham® is a long process where the curing is controlled carefully so that the ham absorbs only enough salt to preserve it. The hams are made from a very rare bread of pigs that are bred in north-central Italy specifically for Prosciutto di Parma® production. They have a specific diet that contains a blend of cereal grains and whey from Parmigiano-Reggiano cheese production. When time for slaughter, the pigs have to be nine months old and must weigh a minimum of 340 pounds.

At the “prosciuttificio” (processing plant) some skin and fat is trimmed to give it, it’s “typical” shape.
Sea salt is rubbed into the meat, which is then refrigerated at 80% humidity for about a week. Remaining salt is then removed and the ham gets a second coat of salt, which is left on another 15 to 18 days, depending on the weight.

Now there is about a seven month process of refrigerating, washing, drying, pre-curing and finally the exposed surfaces are softened with a paste of minced lard, salt and pepper. The hams hang on racks for an additional three to five months. In the end, the hams are cured at least for four hundred days, and some are cured as long as 30 months.

Finally the Prosciuttos have to pass all of the quality control tests and are then fire branded with the official mark of the Consorzio, the five-point ducal crown that identifies them as genuine Prosciutto di Parma®. 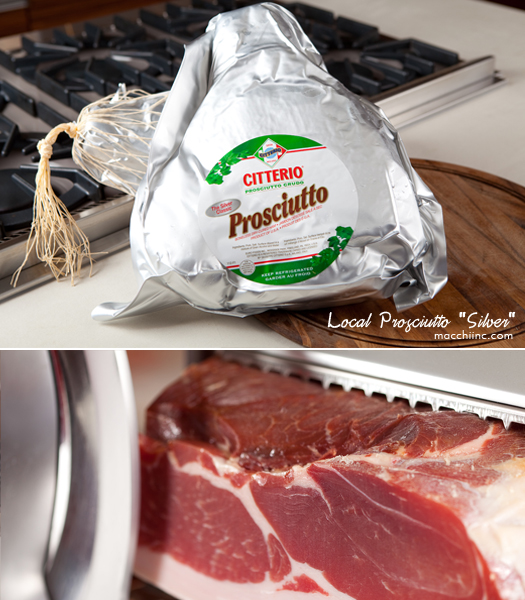 This prosciutto is called “local” because it’s made in the US and not in Parma. The only difference is that the pigs are not from parma but from the mid-west regions of the US. They are much smaller in size therefor the hams need a shorter curing process (aprox. 9-10 months) The “hams” are aprox. 4-5kg, while the ones from Parma are 6-8kg. 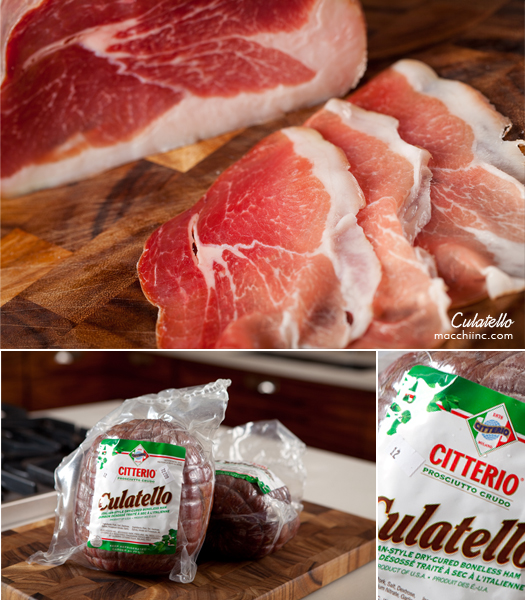 The Culatello is considered as the “Cadillac” of Italian hams for some people. It is made from the larger muscular section of the back legs of a pig. The skin and the bone is removed, it is then rubbed in with salt and covered with the bladder for better results in preserving and protecting it during the time of curing.
The “ham” then gets massaged various times during the 6-8 month curing time. Our Citterio Culatello is also “locally” (US) made but it is one of our more distinct and in higher demand product. The Culatello has a more intense flavor than the Prosciutto “Crudo” (raw) It weighs aprox. 2-3 kilos. 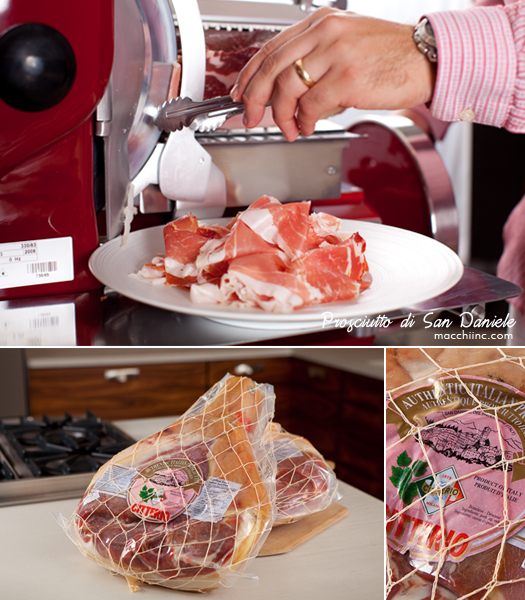 The Prosciutto di San Daniele has a shorter salt curing time than the one from Parma.

They get stacked on top of each other during the curing time, rather than hung which results in being much stiffer and flatter and they have more of the shape of a violin rather than the shape of a chicken leg like the one from Parma.

It is important to let you know though that this is how they are made when they are sold in Italy.

The Citterio Prosciutto di San Daniele’s that is exported to North America, does not have the foot attached nor does it have the shape of a guitar, they are put in similar molds as the Prosciutto di Parma.

What you see in the above pictures are the Prosciutto kinds that we carry at Macchi Inc. They are by Citterio. We are the exclusive wholesalers of Citterio in Canada. Citterio has been for years synonym of top quality. I’ve had many followers on twitter sending me messages telling that they only buy Citterio’s cold cuts. We are proud to supply Canadians with Citterio. We are planning to organise blind tastings soon. If you live in the Montreal area and are interested, let me know in the comment section below by leaving me a reply.